Chevolution is a documentary about the most reproduced image in the history of photography: the Guerrillero Heroico image taken by Korda (and is one of three about the image)  The film is an in depth look at the origins of the iconic  photo and of Che himself.  The image is contextualized from the event that it was taken all the way to the broader discourse on its subsequent commercialization (for example there are a republican and a libertarian wearing Che shirts to “demonstrate how the shirts are made possible by capitalism). 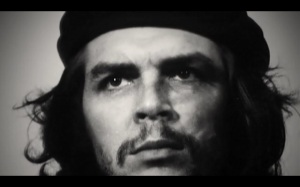 The image was not initially even printed in Cuban news papers, but was first widely circulated by Feltrinelli and later made into a more pop-art style by Fitzpatrick.  Its mass appearance coincided with events like May 68′ amongst other uprisings that were going on in the time around the world.

There are some problems with the documentary, for example there is a long segment about how people don’t realize the “violent nature” of Che, or how his ideas lead to a “totalitarian dogmatic state” without an adequate counter-argument by people who appear in the documentary who clearly sympathize with Che.  Those more sympathetic with the potential of Che are more portrayed as idealists instead of Marxists, although perhaps that is implied by their sympathies.

The co-optation of rebellion, a popular topic amongst the more cultural Leftist theory, is dealt with throughout the film (even with a reference to Marcuse).  The interesting thing here is that the “culture industry” theories of the Frankfurt school seem to apply even to the Leftist reproduction of Che’s image.  What I mean by that is that the original mass production of the famous image were almost the reverse of the co-optation  that we subsequently saw with the commercialization of Che’s image.

The film does an excellent job at examining the origins and meaning of the image from various different perspectives, and takes it very seriously.