Tout Va Bien is perhaps Godard’s most overtly Marxist film.  It’s entire structure is a diagnosis of class relations and essentially a demonstration of the aftermath of May ’68 (which is referenced quite often in the film), while constantly reminding the audience that France 1972 is not May 1968.

The film revolves around two main characters, one of which is played by Jane Fonda.  (The film itself has it’s own political history of receiving as much funding as it did by getting such a famous actress to be in the film which is actually referenced in the film itself).  Fonda’s character is an American journalist living in France as a correspondent to an American radio news company who is married to a filmmaker who was once a New Wave director who during the film had moved on to make commercials (he later claimed that making commercials was “more honest”)

The film begins with an examination of film making itself, with an opening sequence of checks being signed to the different departments and people who made the film, an opening montage that overtly sets up the structure of the story (even referencing the fact that a famous actress should be sought out).  After the main characters are established, it doesn’t take long for the film to focus on the factory.

The political situation in the factory is that of disarray.  The workers are engaged in a wildcat strike that the union (the CGT) does not support.  The boss finds himself helplessly defending his position in society while the leftists are being written off as “troublemakers.”  This is of course quite similar to the situation in May ’68, where the French Communist Party (PCF) did not back the wildcat strikes and student protest movement.  Godard constantly reminds us that this is not ’68 and that the situation is quite more dire here.  The film has a mood of defeat about it (the filmmaker character expresses this quite explicitly in his ending monologue).

With this atmosphere, the two main characters were scheduled for an interview with the manager of the factory about modern management skills.  They of course are thrown into the turmoil of the strike and are in turn locked up with the manager.  The manager is confronted by the two protagonists and is forced to justify the system of capitalism itself: claiming that Marxism has lost its relevance due to the increased standards of living for all in society (a straw man argument of course) and arguing for a society where classes cooperate instead of conflict. 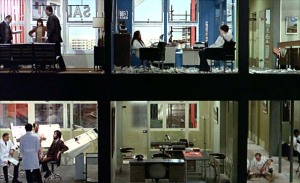 Cross Section of the Factory

Another major antagonist in the film is the CGT representative.  The CGT at the time was aligned with the PCF and continued to be until the 1990s.  The CGT representative demonstrates how the PCF (and in turn the CGT) were moving to the right: arguing for negotiations with the capitalist class/management and maintaining “order.”  They were just as opposed to the troublemakers as the police.

The film also deals with male chauvinism, with minor references towards the beginning of Fonda’s character being a Feminist, there’s a scene in the film where one of the male workers tells the female workers that they should just be at home cooking, the other female workers back her up and call his chauvinism out for what it is.

After the two protaganists are released (and the workers apologize for locking them up, citing that they had no other option), Fonda’s character ends up trying to do a story in the grocery store where a long scene showing people buying groceries while the Communist Party is in the background trying to sell books (A good quote she has to sum up the grocery store in her monologue that is meant to be for her upcoming article “outside the factory it’s still like a factory” which demonstrates how society is shaped by the capitalist structure).  Here the PCF is portrayed as just another commodity to be bought and sold on the market place, just as much a part of the system as the groceries that the consumers are buying.  Then, a group of radical students comes up and begins to question the PCF representative, pointing out contradictions and inconsistencies in their line.  They then start leading a sort of mass theft of the grocery store, encouraging and inciting and radicalizing the consumers while shouting “everything is free!”  The camera then slowly makes its way to the exist while showing the police suppressing the mini riot.  This is an important demonstration of the tactics of some New Left groups that were called into question at the time: for example the Weather Underground‘s “Days of Rage” event was nothing more than an invite of police repression which was condemned by organizations like the Black Panthers.

Then the protagonists return to their normal lives and reflect on the recent events and as a consequence reflect on their own positions in society.  Their marriage is shaken by the events and their self-reflection and we are made just to know that there is some uncertainty ahead.

Overall, it’s a film about the politics of the New Left versus the “old guard” of organizations like the Communist Party, and the consequences of the respective stances each position took in the late 1960s.  The film is almost like a Post-Script to May ’68: demonstrating how the failures of the Left lead to essentially a betrayal of the working class.  I don’t think Godard’s final conclusion is that the New Left should be seen uncritically, but he certainly does demonstrate the problems with totally rejecting it.