The Legend of Rita is a film about a West German “terrorist” group who eventually ends up in the Eastern German Democratic Republic.  The group, which is based off of real historical groups like the Red Army Faction and Revolutionary Cells, goes through a series of failures in West Germany and is in crisis until Rita meets up with the Stasi while in transit to West Berlin.

The group goes through a disastrous jail break while trying to free their “leader” of sorts, and as a result, finds themselves in a difficult position.  They travel to the GDR where the Stasi help them get settled in in Paris.  After Rita has a deadly encounter with a police officer, they are again placed in limbo. 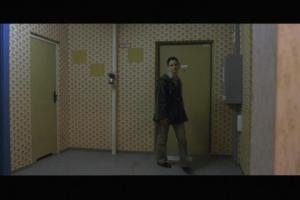 Rita on her way to work in the GDR

The Stasi officer gives them all an offer: to live in the GDR as average working class citizens.  The reaction by these revolutionaries says as much about the state of the Left at that point in history as it does about their characters.  Most of them seem to outright reject the idea.  They want to carry on the struggle in the West or go to a place where the Cold War has “gone hot.”  They almost view their entry into the working class in a “Socialist State” as punishment for their failures, which considering their clear Marxist orientation, shows a significant short-coming in their analysis of struggle.  The philosopher Slajov Zizek often says that the Left is constantly comfortable with its status resisting oppression and fighting it instead of offering a vision for an alternate world.  This comes out quite clearly for this group, except for Rita.

From this point on, the film revolves around Rita’s new life in the East.  The Stasi officer, while prepping her for her new life, says something along the lines of “We’re for the people, that’s why they’re against them” in response to a question Rita has.  It’s interesting to see this ideological phrase here, as the Stasi are not portrayed in a negative light throughout the film nor is East Germany.

The first shot we see of an East German worker is that of Tatjana who looks worn out and depressed.  It seems that this was a very intentional first glimpse into the life of the East German working class.  What follows is a scene of Tatjana’s coworkers picking on and making fun of Tatjana.  For Rita, who has been a Leftist revolutionary, she seems confused by this and asks them why they pick on her, and doesn’t seem satisfied with the answer (which is essentially just a continuation of picking on Tatjana).

Rita and Tatjana develop a close personal relationship that is compromised when Rita discovers that East German television is broadcasting news from the West about her fugitive status, and is identified by one of her co-workers.  Rita is then required to once again relocate and take on the identity of an East German who is not from the West (as opposed to her first fake identity).  She ends up as a day care worker, and develops a relationship with a man who she ends up almost getting married to (there’s some interesting dialogue that exposes the man’s view of gender roles that are quite conservative given the nature of the East German state and it’s more balanced gender relations than that of it’s Western counterpart).  By chance, she runs into one of her former comrades who now has a child.  Rita congratulates her and tells her that she’s glad to see her happy, when her friend responds with “what gave you that idea?”  Their farewell scene is bitter sweet, with the upset friend riding away on the bus with the East German anthem playing ironically in the background: as a sort of display of the awkward position of Rita, and East Germany at that point in general.

First Factory where Rita works in the GDR

As the story progresses, the Stasi officer meets with Rita telling her that “people are waking up” to the realities of the State and the Wall soon comes down.  Rita from this point has a harder and harder time evading the authorities.  She is having lunch with fellow workers when they read the paper and discover that the friend she had run into in an earlier scene was caught by the authorities, she defends the actions of the group, claiming that “they never did anything to hurt this country!”  Her co-workers just claim that terrorists are terrorists and shouldn’t be in their country.  The workers then go on to say how they’re excited to get Levis.  Rita breaks into a mini-speech about how East Germany was a revolutionary experiment, and how it went wrong along the way but was something worth defending.  She is promptly ignored by her co-workers (thus being essentially dismissed as an idealist).  Her speech in a way represents the innocence of even the most rigid of the “Actually Existing Socialist” states, and how, even in their significant and real shortcomings, the alternatives that would eventually come to those states would provide devastation to the populations (for example East Germany now has significant unemployment, few social programs, etc.)

The film uses Rita to represent the socialist ideal in a way.  The bleakness and rigidity of East Germany is not ignored, but it is not a film that is a vulgar anti-Communist film like most about such subjects.  It is considered to be a part of the Ostalgie phenomenon, where East Germany have a certain nostalgia for the former East.  That’s not to say that they wish the Stasi were back, monitoring their lives, but they recognize how their lives were indeed better under even a rigid socialist state.  This film does an excellent job at capturing the mood of East Germany: while “the game was up” for the ruling party in the East, there was still something redeemable about the idea of a workers state enough to where a film like this could be made so many years later and portray the East in a “not-so-bad” light.