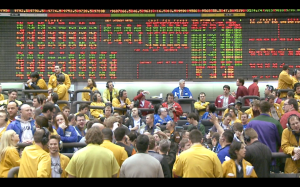 All That Is Solid Melts Into Air is a short film by Mark Boulos that contrasts the excesses of capitalism in the depiction of the Chicago Mercantile Exchange with one of the most exploited parts of the world, the Niger Delta. The brokers in Chicago passionately trading oil futures are contrasted with members of the Movement for the Emancipation of the Niger Delta, which is a militant movement in the region to resist companies like Royal Dutch Shell and for expropriation of that oil wealth. 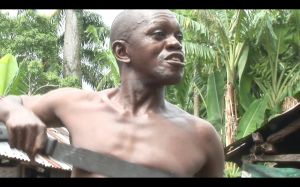 e title of the short film/project comes from a line from The Communist Manifesto. The dialectical nature of such a contrast (two screens directly facing each other showing two extreme ends of capitalism) could not be any clearer. The mere existence of what each screen depicts demonstrates a contradiction of the system of global capital: the dispossession of people from their own resources and land and the foreign ownership of it.

This exhibit/short film is straight forward and to the point and should be a starting point of conversation about neo-colonialism and the continued attempts by the West to dominate places like Africa and the Global South in general. The simultaneous format of the exhibit is an example of how dialectical reasoning can be utilized in art to build consciousness and display methods of resistance.