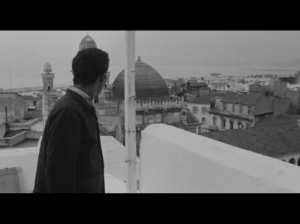 Ali looks on to the city

The Battle of Algiers is a notorious film of its time and has remained important in the context of the major geopolitical affairs of today. It presented a challenge to Western imperialism, and continues to play a provocative role. The most prominent example of  how it remains important decades after its release was its screening in the Pentagon after the 2003 invasion of Iraq, where the State Department was quite clearly attempting to draw lessons from the French experience in Algeria to better understand how to fight anti-colonial struggles they predicted would arise in Iraq. The themes of the film, an occupying Western power trying to subdue a local population, saw striking similarities to contemporary Western adventures. Certain scenes of the film were censored in France for their depiction of the French military using torture.

The film portrays the events leading up to Algerian independence from the French and was released during the wave of independence movements across Africa. It was based on a book by an Algerian National Liberation Front (FLN) fighter Saadi Yacef, who wrote the book while in prison during the conflict the film is based off of. While it attempts to “show all sides,” it’s quite clear from the style and narrative of the film that the French are acting as oppressors and occupiers trying to prevent a national liberation movement. It does not attempt to blindly cheer lead the FLN movement, and certain tactics (like targeting civilian populations) are called into question, the film cannot help but to be an expose of the horrors of colonial rule.

The film received renewed attention after it was screened by the Pentagon which prompted many to make the obvious comparisons between the French occupation of Algeria and the US invasion of Iraq (on top of the eerie fact that the Pentagon screening seemed to show that the US itself was drawing this connection). The torture scenes in the film (which were censored in France, along with the film itself having been banned for a period) in the context of the occupation of Iraq served as an example of the film as a predictive warning for what can come from a colonial occupation. With multiple accusations of the use of torture by the US during the so called “war on terror,” those who put on a screening at the Pentagon seem to have missed the films key points. 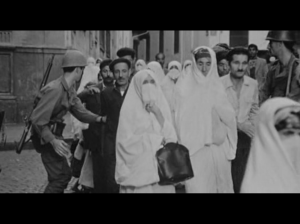 People of Algiers being kettled

The liberation movement in the film is shown to engage in acts of terror,  but not in the way that contemporary Hollywood films depict the perpetrators. Rather in Battle they are highly contextualized and even placed within a broader movement for social justice (something that would be unthinkable even amongst progressive filmmakers today with few exceptions). While they aren’t exactly being justified, the broader movement for liberation from France itself takes on the role of the “main protagonist” even more than leading actor Brahim Hadjadj in some ways. In other words, it is not a story about a personal journey that various characters must engage, but rather about an important turning point for the history of Algeria and France.

The Battle of Algiers has been a film with much written about it since its release so no brief synopsis can do it justice, although perhaps this post can be a starting point an encourage more investigation into the film. It serves as an excellent example of the role that progressive narratives can play (even if under the veil of “not taking sides”) in film.