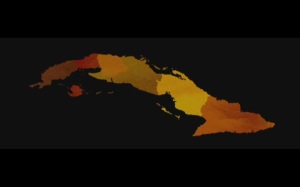 Map of Cuba from the opening

This film covers the career of the Argentine revolutionary Ernesto “Che” Guevara. This film is not directed in a standard chronological style but , in the words of Wikipedia, “an oblique series of interspersed moments along the overall timeline”. The film is somewhat impressionistic and although anyone can enjoy this film as a “revolutionary action film” it does require at least some knowledge of the life of Che Guevara and the events of the Cuban Revolution to fully understand what is going on.

The film has its origins in a screenplay written by the film maker Terence Malik about Che’s attempt to start a revolution in Bolivia. Due to financing problem’s Mali’s proposed film fell though and Soderbergh agreed to take over the project. In taking on the making of a film about Che Soderbergh felt that it was important to provide the context of the Cuban Revolution and the events leading up to Che’s eventual departure from Cuba. Steven Soderbergh has been known as a film maker with leftist sympathies but he has not been regarded as a leftist or highly political film maker. He has been more commonly known as the director films such as the Ocean’s Eleven remake and Erin Brokovich although he has also directed more unconventional films such as Sex, Lies, and Videotapes. According a review in to Rajesh Ginraajan’s blog “Scorp Says So” the film could be seen as a complex collaboration between Malik, the actor Dell Toro (who was heavily influenced by Jon Lee Anderson’s 1997 Che biography “Che Guevara, A Revolutionary Life” but who is said to have read “every possible book on Che”), Soderbergh, and the screenwriter Peter Buchman, who has had a longtime interest in historical biography.

The film is four and a half hours long. It is deeply engrossing, even without an extensive knowledge of the historic subject, and is definitely worth the the greater investment of time.

Che has two parts. The first part, “The Argentine”, covers Fidel and Che’s early friendship and the events of the Cuban Revolution. We see Che and Fidel meeting at in Mexico City in 1955 and their discussions within the international Latin American leftist mileu. Che joins the July 26th Movement to liberate Cuba and we see him aboard the Gramna in his guerilla invasion of Cuba in 1956.

There is an extended section with Che fighting and in the jungle region of the Sierra Maestra Mountains.  He has periodic meetings with Fidel Castro and there seems to be increasing tension between the two men. This isn’t made apparent in the film but this was the period when their was increasing tension between the middle class oriented July 26th movement and allied movements, which merely wanted to overthrow Batista, and Che and other radicals who saw the need for a deeper anti-capitalist and nationalist revolution. Che is shown as a very able and well liked commander but a somewhat harsh disciplinarian. There is a scene where he personally execution executes a guerilla army guide who admits to betraying the guerilla’s position for a large financial reward. Che is also shown as a voracious reader, devouring texts on history and political theory. He teaches literature and history to his troops and works to raise their cultural level. 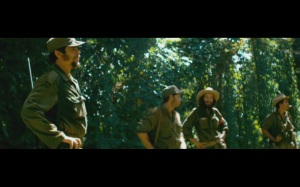 Later in the first half of the film as the Cuban rebels enter the cities there are dramatic but very realistic scenes of Che and a female friend fighting urban guerilla warfare in  the Battle of Santa Clara.

A leading commanders of Batista’s army, turns against Batista offers to surrender his army to the rebels in return for allowing his army to remain intact. This offer is turned down by the rebels.

The second part of the film is “The Guerilla”. The film technique of the second half is much different than that of the first. The music score is different and the film ratio is much smaller, leading to a more tense, “claustrophobic” feeling. The second part  covers Che’s role in early revolutionary Cuba and subsequent career as a revolutionary outside of Cuba. Che  holds trials of the most hated and repressive members of the former Batista regime. Che becomes one of leaders of Cuba’s economic transition from capitalism to socialism and is appointed director of the Bank of Cuba. Amid greatly escalating tensions between Cuba and the US Che looks forward to meeting the visiting Soviet leader Nikita Kruschev but this is nixed by Castro. Che appears to become increasingly frustrated at his role in Cuba although the background to this is not explored in the film.

An early highpoint in this second section of the film is Che’s famous “Address to The Tricontinental” speech in 1966 before the UN in New York. This speech blasts Western and US imperialism,and the internal oppression and hypocracy of the US, to the wild applause of many delegates. This is the speech where Che publicly explained his “focii” theory of revolution for the first time and predicted “one, two, many Vietnams” to oppose imperialism. This scene is interspersed with interviews Che gave, including the one where he famously said, “At the risk of sounding ridiculous, let me say that the true revolutionary is guided by feelings of love.”

Around this time Che became increasingly critical of both what he saw the Soviet Union and the “Eastern Bloc’s failure to aid and solidarize with Third World struggles and increasingly upset about the bureaucratization of the Cuban Revolution. This is strongly hinted at in the film but does not seem to be fully explored. In a 1966 speech in Algeria Che called for Third world solidarity and criticized the Soviet Union. In critizing Cuba’s major ally, and growing bureaucratic tendencies within the Cuban Revolution, Che’s position was in Cuba was made untenable and  some Marxist historians today feel Che reached a political point point where his departure from Cuba was almost inevitable.

In 1966 Che leaves Cuba. There is a moving but again very realistic farewell scene with his second wife. Che and some assistants are able to expertly disguise Che as his father, whom with makeup he strongly resembled.

Che spends some time in Congo. After the assassination of that country’s leftist leader, Patrice Lumumba the country had fallen into civil war and anarchy. Che and one hundred men come to fight with Laurent-Desire Kabila, the leader of the ousted Lumumbuist forces.. Che is quickly disgusted by Kabila,  whom he sees as “not the man of the hour” and a person more concerned with drinking and sex instead of revolutionary warfare  and whose forces lack  any  discipline and are pervaded with  corruption. Che briefly returns to Cuba in secret. 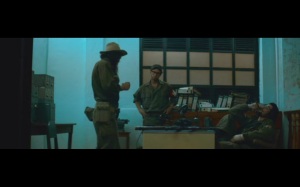 Che and other J26M revolutionaries

Che next goes to Bolivia. His Bolivian period covers much of the second part of the film. He leads a small group of mostly Cuban revolutionaries, hoping to spark a peasant uprising. His movement gets little support from the largely apathetic peasantry. There is some support from a peasant family and others when Che and his band are able to proof they “are for real”. They provide medical care for family’s sick daughter and provide some hope of the possibility of a better future. Oppression, intimidation, and tradition mistrust of outsiders inhibit any significant collaboration among the Bolivian peasantry however. There is a scene where an attempt at urban guerilla warfare in a medium sized of indigenous people fails because of the lack of support from the local population. There is another interesting scene in Cuba where Fidel Castro is worried over the amount of aid  the Bolivian Communists are ready to provide his friend.

The film follows the inevitable grinding down of Che’s guerrilla movement. There is an interesting scene where the French journalist Regis Debray, then a leftist hero and friend of Che and a participant in Che’s attempt to foster a Bolivian revolution, and other sympathetic foreigners, take their leave and return home. Che, an asthmatic, loses his asthma medication and is increasingly handicapped by severe asthma attacks. There are vivid scenes where the CIA laison officer Felix Rodriguez is literally telling his Bolivian army allies how to contain Che’s revolution and how to capture him.

The guerilla army is split in two. One group, with the German-Argentine revolutionary Tamara Bunke, “Tania” is pursued into a trap by Bolivian Army pursuers.

After a shootout, Che himself is captured. He expects to be killed right away. Instead hos Bolivian captors chain him to a wall and brutally interrogate him. Despite this continues to try to discuss Bolivia’s political situation and seems to be attempting to gain the friendship of one of his guards.

Finally Che is shot by a guard Mario Teran,who appears to be a brutal sociopath. He appears to have won the opportunity to kill Che after picking strawsand is promised an extra alcohol ration in return.

This film is quite memorable and is well recommended. While it can better be enjoyed with a knowledge and understanding of the historical contexts of the periods in Che’s life, the film can also elicit such an interest. Almost every scene in the film can be a starting point for  much discussion and debate among those interested in alternative’s to capitalism today. Where Che’s tactics correct for their situation? What is the nature of the Cuban Revolution and where is it going? This film provides the important role of acting as a springboard for people today looking for alternatives to savage neo-liberal austerity.
The realistic film style, a welcome antidote to most current Hollywood productions, creates a feeling of credibility. Che Guevara is shown as fully human and his goals and motives are understandable. The role of the CIA in tracking and killing Che elicits outrage. His killing, by  (interestingly) creates a feeling of “open ended closure”, telling us, in effect, that Che’s life in definitively over but his overall project, the goal of liberating humanity, is now up to us, a new generation.

In an ironic afterward the man who killed Che, Mario Teran, was treated fore a disease causing blindness by Cuban doctors in 2007, forty years later.