Reds is a peculiar film in that it is a major motion picture funded by a Viacom company (Paramount) that portrays not only the founding of the American Communist Party in a positive light, but also the Bolshevik revolution of 1917 in a positive light.

The film revolves around the story of John Reed, who was a journalist and activist in the early 20th century.  While it is mainly about his experiences, it is not a traditional biopic (i.e. it doesn’t detail his entire life and the most important things that shape his character, etc.) but instead is more the story of his political progression from the time he was already writing for The Masses until his death in 1920.

The style of the film is executed quite well: having what Beatty labels “witnesses” interviewed throughout the film adds an element to the film that makes one remember that these events really did happen (minus perhaps minor things that aren’t relevant).  These interviews were viewed by Beatty as something to “move the story along” and not as a documentary style, although I would argue that they serve as both (and I would imagine he could make a documentary just on the interviews). 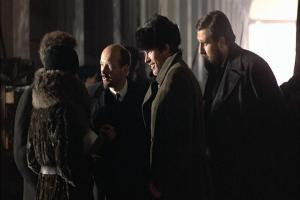 Reed and Bryant meet with Lenin in Russia

Reed’s journey in the film certainly is sometimes very typical as his love story can be very “Hollywood-esque. ” (Zizek even makes a comment on this where he talks about how Hollywood will even tolerate the Russian revolution as long as it’s promoting traditional romance: towards the end of http://www.youtube.com/watch?v=UVqofPZaV9Q and the next part, although I’m not sure this reduction of Reds is %100 on).  Even though the film suffers the problems of most films that are essentially biopics, Reds still maintains an atmosphere of revolutionary change where the main protagonists are challengers of capitalism, and the film doesn’t paint that in a negative light.

While the atmosphere and environment of the film does put the viewer in the “socialist perspective” to some extent, the theoretical battles in the film can at times be a little lacking.  There are multiple exchanges between Reed and Emma Goldman that don’t amount to much actual theoretical debate and seem to be instead specific political disagreements (although in all fairness those political disagreements come from broader disagreements between Marxists and Anarchists in general).  There are also times where Reed runs into conflict with the new Soviet authorities over censoring/changing speeches, wanting to return home, etc. and Reed is sometimes painted as blindly accepting whatever the authorities will do which I think can be a little problematic at times.  The film does, however, sometimes go into the internal problems of the organizations of socialist/communist parties.  For example the right wing of the Socialist Party in the US demonstrates its willingness to dismiss Reed and the Marxists of the party just for supporting the Russian revolution, and the pianist plays a patriotic tune while conflict breaks out in the hall (a great touch of irony in my opinion!)

Overall though, the film is a major Hollywood production that paints an American Communist revolutionary in a positive light and compared to other films, it isn’t too shallow (considering the context in which it was made).  The film is worth checking out for anyone who hasn’t seen it.