English Title: Even The Rain 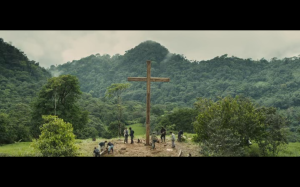 The set of the “film within the film”

Even The Rain is a film about the “Water Wars” of Boliva that took place in late 1999 and early 2000. The plot revolves around a director (played by Gael García Bernal) who is making a film about Christopher Columbus’ early brutal encounters with indigenous populations in the “New World.” This fictional film is depicted throughout Even the Rain as a parallel struggle to the water wars.

Instead of just framing the problems of water privatization and issues of global capital, Even the Rain is as much a film about the actual resistance to those attempts by capital than it is just about the process of (foreign) capital’s attempts to acquire basic resources like water. Throughout the film, one of the main actors hired for the “film within the film” is a leading activist against the water privatization who also plays one of the main ingenious figures who resisted the violence  brought onto indigenous peoples by Christopher Columbus. This perspective of the film provides voice to the resistance to such measures by global capital in ways that go beyond telling the story of globalization as a story of victimizers and victims and instead gives agency to those who are part of the process and attempt to challenge the process itself.

The film opens with a nod to Howard Zinn, whose style of telling history from the eyes of the oppressed is quite clear in the film through the use of the “film within the film” to depict the parallels of the struggles of the past as similar to contemporary struggles. The complexities of oppression are also present in the film, for example a scene in the car of the filmmaker includes a conversation about language and privileged (an argument breaks out about not filming in English, which would have made more money, and the lack of presence of indigenous language).

The main event of the film, or climax, revolves around a revolt in the city of Cochabamba. This famous event eventually helped lead to the ascendency of the Evo Morales government to power. The revolt is certainly portrayed in a positive light (which even emotionally affects some characters who had clearly been skeptical to the demands of the local residents).

Overall, the film has an important message of social justice, and is a cinematic achievement in itself. It does an excellent job at capturing a revolutionary period while at the same time avoiding cinematic cliches about such struggles.