Conquest of the Planet of the Apes is the fourth film of the original Planet of the Apes series and is perhaps the most “radical” of them all (which is not to discount the political importance of the original film).  It is the account of how the apes came to power through a revolution lead by the main character named Caesar.  The film was made in the context of the later civil rights era and during a time of revolutionary upsurge in the United States and around the world, and while it had revolutionary undertones throughout, including an ending that was “sanitized” to be less radical.

The atmosphere of the film is one where apes are driven into what is essentially slave labor by a “dystopian totalitarian” human society.  The subordinate role of the apes in the film was the result of a plague that killed off all of the pets that humans used to own, so they turned to apes to be their “servants” as a result, with the backdrop of the prior film where it was revealed that apes would one day rule humans: thus leading to an authoritarian control over how apes were owned and disciplined.  This drive for satisfaction and ownership while looking to be serviced could perhaps be seen through the lens of a critique of possessiveness and perhaps even a more Marxian notion of commodification.  It was the humans desire for pets to own, not necessarily companionship, and their fear of their “new pets” that lead to the conditions of the society portrayed in Conquest.

The film is itself a portrayal of a revolutionary situation under the leadership of Caesar who gets to work with “the governor” under the top section of the security of the city while secretly plotting a revolt by training and arming many apes in the city.  Small acts of resistance skyrocket in the city, showing the discontent of the apes who are preparing for revolt and spreading the idea of resistance amongst the general population. 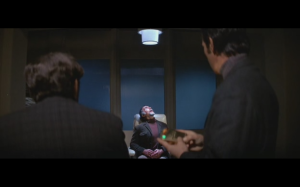 There are many important themes dealt with in the film, including the opposition to the brutal repression of the apes within the government of the city (in a sense representing the “liberal” opposition to a McCarthy style witch hunt).  Another interesting scene is when Caesar’s former “master” is being interrogated by a device called the “authentacator” which is essentially an advanced lie detector test that makes the subject tell the truth.  The dialogue contained in that scene is reminiscent of the calls for transparency in today’s world, yet in this context: that very transparency is used to reinforce the existing power structure.  While this analysis may seem overly analytical, it does remind one of certain criticisms of the post-modern phase of global capital, or the “capitalism with a human face” that is appealed to that attempts to justify continued aggression by the system.

The film depicts a very violent revolution, and while the original ending (spoiler alert ahead) has Caesar ordering the death of the oppressive governor, the studio (supposedly due to negative audience reactions) had the ending changed to make Caesar more forgiving in the end.  This effected the entire structure of the following film as well.  This is an excellent example of an ideological intervention in an otherwise seemingly subversive film for the era.

Overall it is also an example of how a film at this level (a highly grossing franchise) can be “subversive.” This is important in that it demonstrates that not only small independent films can contain messages relevant to liberation and struggle. The shortcomings of the venue and arena where it was made (like the forced change in the ending), however, cannot be overlooked. The double edged sword of “subversive film” that is simultaneously a major Hollywood production and an attempt to critique the existing system provides plenty of questions about film and the film industry.